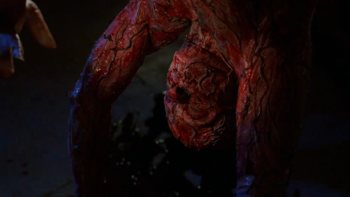 "You can't stop it. You never do. You always fail. It's your lot."
Written by David Amann
Directed by Kim Manners
Reyes: What I'm saying is, this man was skinned alive just hours after describing it in exact detail.
Doggett: Maybe he could describe it because maybe somebody threatened him.
Reyes: He said it came in a dream, or a vision according to the woman who last spoke to him.
Advertisement:

A man is murdered by being skinned alive after recounting a dream foreshadowing the event. Doggett and Reyes investigate.

Scully: Well, maybe in this life you succeed.
Reyes: Maybe.