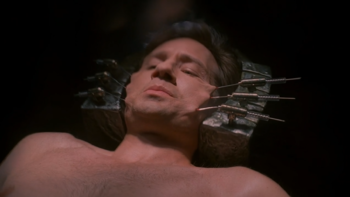 Pictured: Mulder going through the aliens' definition of a dental operation.
Written by Chris Carter
Directed by Kim Manners
Doggett: So, what do you think happened? To Mulder? What's your theory?
Scully: What's my theory? My theory is you don't know Mulder at all. You never did.
Advertisement:

"The kid's on the loose! You have the photo! Move!"