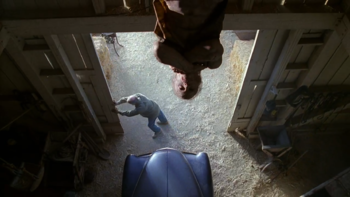 He is vengeance. He is the night. He is... a literal Bat-man.
Written and directed by Chris Carter
"I know on the evolutionary ladder bats are real close by the apes and just as we came from the apes, so might a man, sprung from a bat. To live and hunt like a bat, but with the cold-blooded vengeance of a man."
— Ernie Stefaniuk
Advertisement:

Scully and Doggett clash as they investigate their first X-File together, a bat-like creature on a mission of revenge.

Scully: And I just want to say, um... thank you for watching my back.
Doggett: Well, I never saw it as an option. I'm sure you don't either.