This Is Not Happening 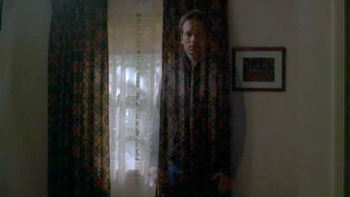 "Bad as you want to find Mulder, you're afraid to find him, too."
Written by Chris Carter & Frank Spotnitz
Directed by Kim Manners
Skinner: Richie Szalay didn't find an alien last night. He found a woman. A woman whose name you will remember - Teresa Hoese.
Scully: Teresa Hoese was the young mother who was abducted the night before Agent Mulder was.
Skinner: And who was returned last night.
Advertisement:

When a woman abducted around the same time as Mulder is found alive in Montana, the agents investigate, and Scully and Skinner begin to hope this could mean Mulder may be found alive as well. Doggett remains skeptical and enlists the help of a former associate Special Agent Monica Reyes (Annabeth Gish).

"No... no! THIS IS NOT HAPPENING! NOOOOOOOOOOOO!"