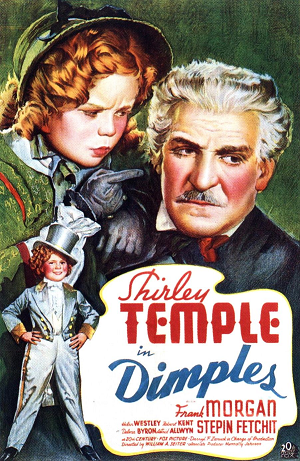 The place is New York City. The time is the years leading up to The American Civil War. Sylvia "Dimples" Appleby (Temple) lives with her eccentric grandfather, "The Professor" (Morgan). Supposedly a music teacher, the Professor's actual discipline appears to be thievery. Mrs. Caroline Drew (Helen Westley), a Grande Dame, takes a liking to Dimples and wants to adopt her, but Dimples and the Professor refuse to be separated. Meanwhile, Mrs. Drew has disowned her nephew Allen (Robert Kent) for becoming a Broadway producer, this being back when the theatre wasn't considered reputable. Allen plans to adapt the country's latest bestseller, Uncle Tom's Cabin, as a play, and wouldn't you know it, he needs someone to play Little Eva.