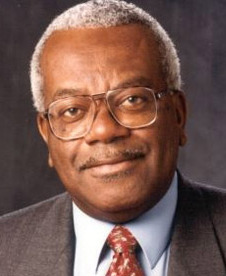 "The thing about television is that you can't fake it. Your sense of discovery must be genuine; you can't pretend to be surprised."
Advertisement:

Sir Trevor McDonald, OBE (born 16 August 1939) was the first black newsreader in the UK, starting at ITN (the company that provides news for ITV and Channel Four) in 1973 and carried on doing this until 2008.

As well as being the presenter of News At Ten, he has presented a number of other shows (Undercover Customs, Tonight with Trevor MacDonald) and hosts awards shows.

He's notable for his distinct voice, "And finally", and being a generally cool guy.

He's been parodied too - Lenny Henry did a memorable parody of him in Tiswas ("Trevor McDoughnut"), and he was also impersonated on Dead Ringers.