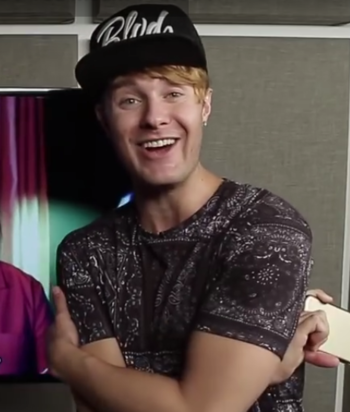 Bart Baker is a Youtube channel started in 2007 and run by, well, a guy called Bart Baker. The channel's content largely consists of parodies of popular music videos directed by Bart, who later started acting in them. These typically mimic the original video in terms of content and outfits worn by the performers, but expect these to be criticized, often by the performers themselves, along with unsavory elements of their personal behavior.
Advertisement:

In 2019, Bart decided to quit YouTube due to the rampant demonetization. After receiving an offer from a Chinese video-making company, he started making music videos on a Chinese video-sharing site. However, on August 29, 2021, Bart uploaded a video about returning to YouTube, and talks about investing on cryptocurrency, and plans on doing three to four parodies a year. This is then followed by a music video called Polydoge.