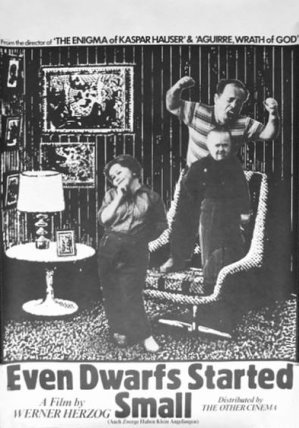 A black-and-white Werner Herzog film that takes place in an institution where several people with dwarfism are held against their will. They soon band together and stage a riot, rising against their keepers and causing mayhem throughout the facility. The film itself is unique in that the entire cast is played by dwarfs, although it exploits this rather controversially- most of the rioters act like wild, dangerous children, causing needless amounts of destruction, such as setting fires and tormenting blind patients, as well as performing random acts of animal cruelty, including one scene where they literally crucify a monkey.