Toys / SD Gundam Gaiden Knights Of The Round Table 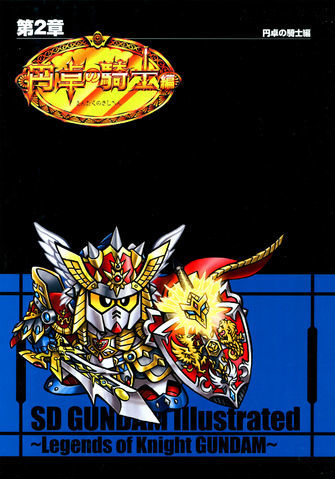 Seven years prior to the story's beginning, the Zabiloniya Empire attacked the Kingdom of Britis. With the death of Britis' ruler, King Gundam, and the Knights of the Round Table being either separated or killed, the Zabiloniya Empire took over the Britis Kingdom, and the people have been living under tyranny since. Cut to the present day where the Britis Kingdom's young prince, Crown Knight Gundam, reappears after a mysterious disappearance and, with the royal family's Vatras Sword in hand, swears to take down the empire while gathering together members of the new Knights of the Round Table!

While Knights of the Round Table borrows elements from other fantasy stories like the Arthurian Legend and Conan the Barbarian, its characters are based off of Mobile Suit Gundam F91, Plamo-Kyoshiro, and Mobile Suit SD Gundam: Psyco Salamander no Kyoi.

Tropes associated with SD Gundam Gaiden: Knights of the Round Table are: