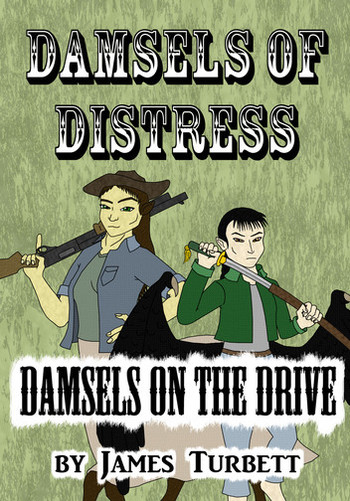 A series of novellas by James Turbett. The Damsels of Distress are an all-female mercenary gang made up of six members of different species. The world that they inhabit takes inspiration from westerns, mob stories, and miscellaneous fantasy tropes. Humans share the stage along with a number of sentient species such as wendigos, centaurs, tengus, and many others. The mercenary business is a seller’s market. Inter-species tension, hungry mob bosses, and the availability of firearms provides plenty of reasons for a fight. The Damsels of Distress rarely need to look far for work. They can get just about any job done... assuming that they can tolerate each other long enough to do so.

Damsels of Distress provides examples of the following tropes: