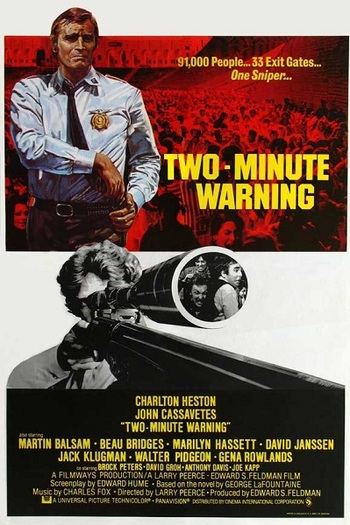 It's the day of the national pro football championship in Los Angeles and various people are descending on the city, including an unnamed sniper who has staked out the Los Angeles Memorial Coliseum as his hunting ground. It's up to police captain Peter Holly (Charlton Heston) and SWAT team sergeant Chris Button (John Cassavetes) to bring the killer down before he starts a panic in a stadium loaded with more than 90,000 fans.

The film includes an All-Star Cast and a sinister tone throughout, thanks to it being one of the few R-rated disaster movies. The movie is also notorious for having an alternate Lighter and Softer TV-version that adds 40 minutes of footage including a new subplot that shows the events at the stadium are meant to cover up an art heist taking place across the street. This version cuts out most of the deaths and edits the storylines from the theatrical version.