Recap / Asterix and the Actress 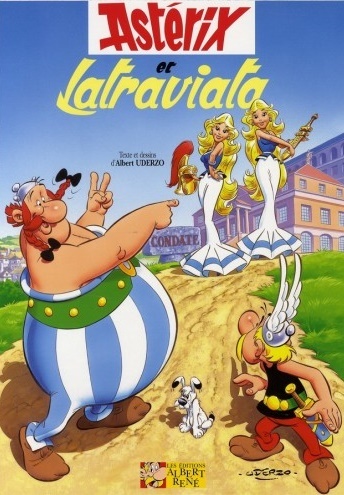 For Asterix and Obelix' birthday party, their parents have decided to come from Condatum. Their mothers have already arrived, bringing a fabulous Roman sword and helmet as presents, and they immediately fuss about why their sons are still single; their methods to rectify the situation, however, bring little happiness to their offspring.

Meanwhile, however, Asterix and Obelix' fathers - who run a 'modernities' store in Condatum - have inadvertently got themselves into a tight spot: an alcoholic legionary veteran (Tremensdelirius from Asterix and Caesar's Gift) has pawned a helmet and a sword in their shop - the personal weapons of Pompey, Caesar's enemy, which are now in Asterix and Obelix's possession. Of course, their rightful possessor wants them back, and to this end he employs one of his agents, Decurion Fastandfurius, and a gifted tragic actress named Latraviata. Disguised as Panacea, Obelix's love interest, who is allegedly suffering from amnesia, Latraviata is to infiltrate the Gaulish village and retrieve Pompey’s weapons.

However, the real Panacea and her husband Tragicomix soon discover that Asterix and Obelix's fathers have been imprisoned by Pompey, and they immediately travel to their village to warn their friends. On their way they run into Latraviata and Fastandfurius, who have left the village with Asterix and Obelix (who have not yet realized what was going on) in pursuit, and the game is exposed. Fastandfurius is "menhired", Pompey’s weapons are returned to the two friends (with some "slight" damage from menhir pressure), and Asterix and Obelix race to Condatum to free their fathers and to give Pompey a run for his money. At the end of the story Latraviata is the first actress ever to receive an award for Outstanding Performance, which is believed to be how the César Award was born.