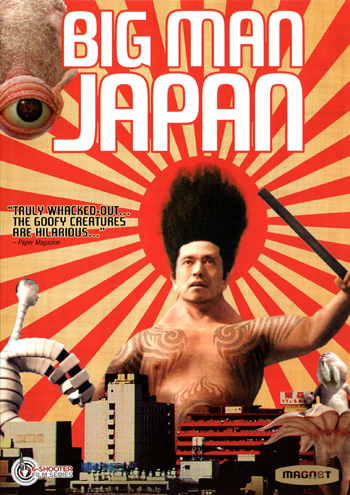 Dai-Nihonjin, released internationally as Big Man Japan is a tongue-in-cheek 2007 Japanese Toku film written and directed by Hitoshi Matsumoto (of the Downtown comedy duo fame), who also stars as the somewhat-eponymous protagonist. The film utilises a number of styles including Mockumentary, Kaiju and mild satire to build its laughs.

The story follows Masaru Daisatô, an almost-ordinary middle-aged man, and a documentary being made about his life. Why is such a seemingly non-descript man deserving of the effort? Because he is able to take in great electrical surges to become a gigantic warrior whose purpose is to defend Japan from some truly bizarre monsters, that's why.

Sadly, this inherited superpower is no longer treated with the same public appreciation as it once was. Daisatô's senile grandfather is spending his last days alone in a retirement home, and Daisatô himself has been forced to have his fights televised and judged by the unpleasable populace while he lives alone in a rather decrepit house. He rarely gets to see his daughter and it seems he's a target of green activists and others for the collateral damage he tends to cause. Of course, he doesn't have much of a choice in the matter and by the end of the film, it seems his time has come at the hands of a particularly dangerous monster.

The final product has recieved mixed reactions, but many were at least overjoyed with the surreal comic touch of the film, if not perhaps so with the near dramatic elements. Fans of Matsumoto's may be able to see recurring themes re-emerging here, as well as being able to see the faces of some of his occasional collaborators.