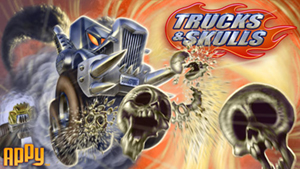 Trucks are Good, Skulls are Bad. DESTROY SKULLS!
Trucks & Skulls is an Angry Birds clone developed by Appy. Instead of flinging birds at pigs, you're launching Trucks into Skulls.

It's noticeably a lot Darker and Edgier than Angry Birds with the setting being a world themed after gothic/punk rock themes and lots of Stuff Blowing Up. This game takes Rated M for Manly and runs it Up to Eleven.