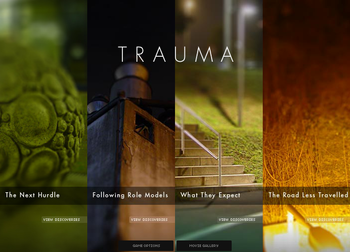 is a short Adobe Flash game created by Krystian Majewski. It chronicles the dreams of a woman recuperating from a car crash.
Advertisement:

Its gameplay is probably best described as a variety of a Hidden Object Game, as you are supposed to find small photos buried in the background of the screens (which are themselves real-world high-definition photos taken by the developer). However, you are also supposed to trace specific patterns through the screens with your mouse in order to activate transitions and such, in a way somewhat reminiscent of calligraphy in Ōkami.

It can be played for free on its website

, and can also be bought for PC through Steam, where it was released on 8th of August, 2011. It was also released on iOS, and used to be available on Desura before the latter went bust.

No relation to the 1993 Dario Argento film, or the NBC medical drama.