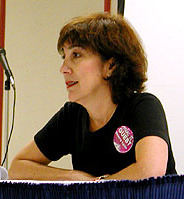 Sherry Lynn (born May 20, 1952 in Tacoma, Washington) is an American voice actress cast primarily in cutesty young girl roles. Interesting fact: she's (as of this edit) the 36th highest grossing actor in the United States,

(and the number 1 actress) all for voicing extras.

She's quite an underrated Woman of a Thousand Voices, and can do adult and teenage female voices quite convincingly in addition to boys and the little girl roles for which she's known. She notably juggled three major characters in the Tenchi franchise (Sasami, Kiyone, Tsunami).