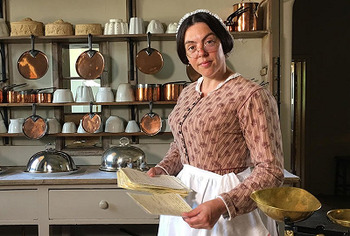 The Victorian Way is a series of videos

by the English Heritage

on YouTube, titled "How to make X — The Victorian Way". The show presents various delicious recipes of classical British cuisine from the mid-to-late Victorian period. Later it also introduces other aspects of life in the traditional English countryside mansion, like gardening, making butter or taking care of laundry.

The main character of the videos is Mrs Avis Crocombe, the head cook at Audley End House. She presents her art of cooking and shares her favourite recipes with viewers. Usually she shows what she cooks for Lord and Lady Braybrooke and their guests, but sometimes she shares recipes for meals that are cooked for the staff.

There are also maids and scullery maids who help Mrs Crocombe with less demanding tasks in the kitchen, of those two were introduced onscreen: Mary Ann and Sylvia. Another character is Edgar Ashman, the third gardener at Audley End, who shows viewers the Audley End's gardens and is in charge of harvesting apples. The head gardener, Mr Vert, also makes an appearance. Miss Fanny Cowley is a dairy maid who shows viewers how to make herb butter. Mrs Warwick, the housekeeper, is introduced as she gives a tour of the laundry to a potential employee.

Avis Crocombe is played by historical interpreter Kathy Hipperson. The series is filmed on location at Audley End House and Gardens in Essex. The web series got its Spin-Off Cookbook How to Cook the Victorian Way.

Mrs Crocombe, the Victorian cook, makes some edible decorations from traditional gingerbread to hang on the Christmas tree at Audley End House.

Mrs Crocombe, the Victorian cook, makes some edible decorations from traditional gingerbread to hang on the Christmas tree at Audley End House.