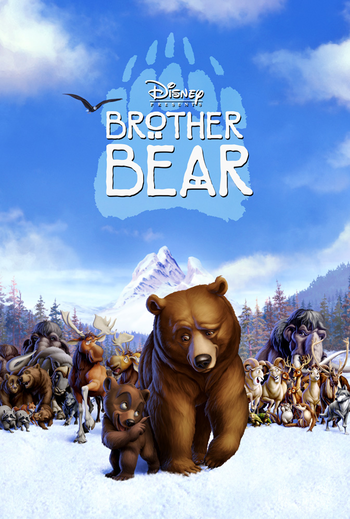 2003's Brother Bear is the 44th film in the Disney Animated Canon, and the second-to-last traditionally animated theatrical film produced by Disney for five years, until 2009's The Princess and the Frog. It was also the last movie produced by their Florida studio. Home on the Range succeeded Brother Bear, which actually DID end their traditional animation department until 2009.

The story tells the tale of Kenai, a young man growing up somewhere in the Alaskan wilderness about 10,000 years before present. He is busy preparing for his coming-of-age ceremony along with his two older brothers, Sitka and Denahi, but when said ceremony occurs, he is... less than thrilled with the totem, or "spirit animal" that he is assigned, which turns out to be "The Bear of Love." To prove his toughness, he attempts to track down a basket dragged away by a bear who had stolen some food during the ceremony, and angrily provokes the bear after finding it. His brothers rush after him to find him cornered by the bear, and the three try to ward it off. Kenai and Denahi get out okay, but Sitka dies saving them. Later, Kenai hunts down the bear alone and slays it out of vengeance. The spirits of the land - Sitka now among them - are greatly disappointed with Kenai's needless violence, and, in an attempt to teach him a lesson, turn him into a bear.

Denahi encounters Kenai's bear form stumbling around, disoriented and confused right after his transformation, with Kenai's shredded clothes at his feet. Because of this, Denahi mistakenly comes to the conclusion that this bear has killed Kenai — though the bear actually is Kenai — and resolves to track it down and kill it.

In order to change back into a human, Kenai needs to find a certain mountain to converse with the spirits, while avoiding Denahi, who he is unable to communicate with as a bear. Though on his way there, he picks up a hanger-on in the form of a small, energetic, orphaned cub named Koda. Initially, Kenai is just as annoyed with this as he has been with everything else that's happened to him, but he slowly grows to like the cub, and as the two bond, Kenai grows and begins to see life from a different perspective.

Not to be confused with the other Brother Bear or the children's book Thank You, Brother Bear by Hans Baumann and Eric Carle.

Kenai gets his leg caught in a snare trap. After several failed attempts to free himself, he meets chatty cub Koda and eventually reluctantly makes a deal with Koda, who undoes the trap surprisingly good ease (albeit with rather painful, and even more undignified results).

Example of:
Caught in a Snare

Kenai gets his leg caught in a snare trap. After several failed attempts to free himself, he meets chatty cub Koda and eventually reluctantly makes a deal with Koda, who undoes the trap surprisingly good ease (albeit with rather painful, and even more undignified results).