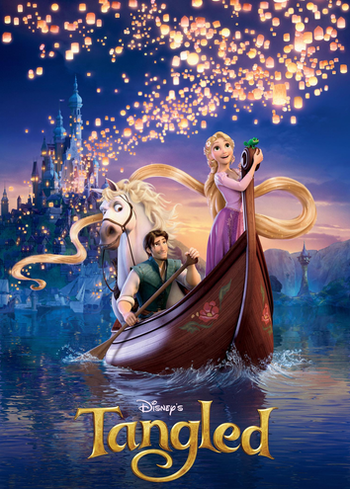 ♫"And at last I see the light
and it's like the fog has lifted..."♫
Rapunzel: I've been looking out of a window for eighteen years, dreaming about what it might feel like when those lights rise in the sky. What if it's not everything I dreamed it would be?
Flynn Rider: It will be.
Rapunzel: And what if it is? What do I do then?
Flynn Rider: Well, that's the good part, I guess. You get to go find a new dream.
Advertisement:

Formerly directed by legendary animator Glen Keane, who wanted a new look that required new CG technology, but it took too long to perfect, and the tone and plot details changed many times: the total production time of this movie is nine years. Disney initially wanted to cash in on the pop-culture-heavy Shrek humor from the Turn of the Millennium, only to change the concept of the film again when the story and technology failed their expectations, and turned it into a more straight-forward fairy tale drama. When management changed, John Lasseter altered its development a third time, and we now have a romantic comedy that balanced the two, with a modern attitude. In this time, Keane developed health issues and he had to leave the project for a while. He came back to executive produce and supervise the animation instead and was replaced by Nathan Greno and Bryon Howard (the latter one of the directors of Bolt). Tangled ended up a success, and its style of storytelling and animation paved the way for an even bigger success, Frozen.

A live-action film adaptation is reported to be in development. The movie is also featured as a world in Kingdom Hearts III.

Tropes for the play include

Flynn: Did Rapunzel and I ever get married? Well, I am pleased to tell you, that after years, and years of asking and asking and asking...I finally said yes.
Rapunzel: Eugene...
Flynn: Alright. I asked her.
Rapunzel: And we’re living happily ever after.
Flynn: Yes, we are.
Feedback