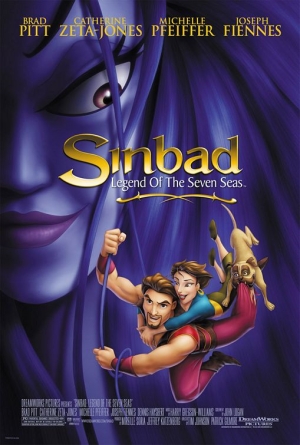 "What could be more perfect than this? A noble prince, a priceless treasure and a black-hearted thief. Oh, this is going to be fun..."
— Eris
Advertisement:

The final traditionally-animated Dreamworks Animation film, a Lighter and Softer re-imagining of the famous Sinbad stories, making use of a transitional blend between traditional and 3-D computer animation.

Charming pirate captain Sinbad (voiced by Brad Pitt) is on a quest to steal the legendary Book of Peace and take it for ransom. However, when he attacks the ship carrying The Book, he runs into his childhood friend Proteus (Joseph Fiennes) who is responsible for the book's safety. They are suddenly attacked by a Sea Monster — sent by Eris (Michelle Pfeiffer), the Goddess of Discord, who has her own plans for the Book — and they team up to kill it. After nearly drowning in the ordeal, Sinbad is approached by Eris herself, who strikes a deal with him to steal the Book of Peace, in return for which he gets all the riches in the world.

However, Eris then steals the Book herself and frames Sinbad for the robbery, getting him arrested and sentenced to execution. Proteus takes Sinbad's place in prison, pleading to the Council that Sinbad be allowed to prove his innocence by stealing the Book back from Eris. If Sinbad fails or does not return, Proteus offers himself to be executed instead.

Accompanied by his faithful crew and Proteus's fiancée, Marina (Catherine Zeta-Jones) - who is along to make sure Sinbad keeps his end of the deal - our hero must now journey past the edges of the Earth and into Tartarus, Eris's Realm of Chaos, to retrieve the book and return before Proteus's execution.

The film made use of the same blend of 2D and 3D animation seen in Disney's Treasure Planet (released a year earlier), mixing traditionally animated characters with CGI-created creatures, objects, and backgrounds in 3D. Although it was a flop at the box office, the movie, like Treasure Planet, has a solid cult following.

The Book of Peace

The Book of Peace