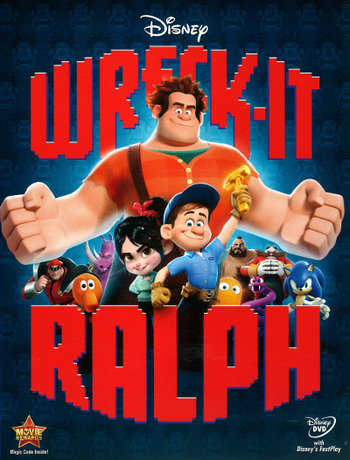 When the game is over, a new world comes to life.
"It sure must be nice, being the good guy..."
— Ralph
Advertisement:

Wreck-It Ralph is the 52nd animated film from Disney's canon line-up, directed by Rich Moore, who was a former director on The Simpsons and later on The Critic and Futurama. The film was initially teased during E3 2012 and released on November 2, 2012, preceded by the animated short Paperman.

The film revolves around the titular character, a villain living in the world of a 1980s 8-bit video game starring Fix-It Felix Jr. (Jack McBrayer) as one of the many machines in an arcade center. Ralph (John C. Reilly) is fed up with being disrespected as the bad guy for 30 years straight, so he sees an opportunity to become a hero within the sci-fi Light Gun Game Hero's Duty featuring Sergeant Calhoun (Jane Lynch). Going into the game with the simple goal of winning a medal, he unwittingly brings a deadly enemy to another of the arcade's games, Racing Game Sugar Rush, where he meets a "glitch" named Vanellope Von Schweetz (Sarah Silverman) and tries to help her accomplish her goal of competing in a race. Meanwhile, Felix and Calhoun follow Ralph to Sugar Rush to fix the problems he's caused in both of their respective worlds.

A sequel was officially announced at the end of June 2016, titled Ralph Breaks the Internet. It was released on November 21, 2018.

A Just For Fun page for the game Fix-It Felix Jr. can be found on the Wiki.

open/close all folders
Tropes # to B
Tropes C to D
Advertisement:
Tropes E to H
Tropes I to L
Tropes M to P
Tropes Q to T
Tropes U to Z
I'm bad, and that's good. I will never be good, and that's not bad. There is no one I would rather be... than me.
Feedback