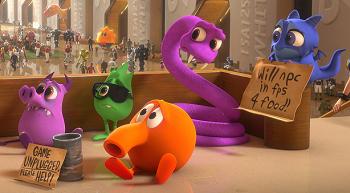 "Will appear as a Non-Player Character in a First-Person Shooter for food." Are you happy, modern gaming industry?note  (on the brighter side of things, though...)

Roger Ebert once said that Video Games were not art to him.note He did eventually back away from this opinion.

Never mind the gamers' community's backlash, this is what will make anyone with that idea change his or her mind. Because, just as Toy Story did with toys, Wreck-It Ralph will do with Video Games: showing the heart that lies within such things.

And given this is Disney we're talking about, the task will be accomplished in the most gut-wrenching of ways.

Oh, and it's directed by Rich "Lisa's Substitute" Moore, to boot. Bottom-line if you don't know what that means: You. Will. Cry. Prepare your tissues.

Final important note: As a Moments subpage, all spoilers are unmarked as per policy. You Have Been Warned.

"You really are a bad guy!"