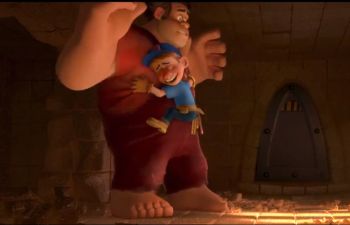 If Mario can engage in Go-Karting with Bowser, then anything's possible.

Ah, Disney canon, you have it all: Lil' Mermaids, Hunchbacks, leonine royals, girls who changed their fate and that of the entire nation of China... you name it.

And now, we have Video Games with this movie! Sure, some people say Video Games aren't art, but even then, some also say toys aren't art either, and that didn't keep PIXAR from showing us the heart behind toys.

So, thanks to Disney, let's see which Heartwarming Moments lie behind Video Games.

Oh and by the way, this movie was directed by Rich Moore. Who also did "And Maggie Makes Three".