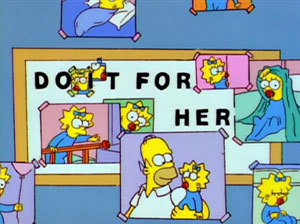 "Oh, there are pictures [of Maggie]; I keep them where I need the most cheering up."
Homer puts up with, and does, a lot of crap. Now you know why.
Advertisement:

The Simpsons may be known for its satire, but that doesn't stop it from having some really Heartwarming Moments anyway.