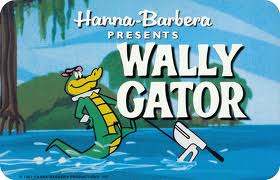 One of the series created by Hanna-Barbera after the success of Yogi Bear and The Huckleberry Hound Show. Created in 1962 as part of The New Hanna-Barbera Cartoon Series, a syndicated package which also contained Touché Turtle and Dum Dum and Lippy the Lion and Hardy Har Har. Wally Gator (Daws Butler) was an alligator who craved going outside the confines of his zoo's walls, and as such tried to escape in almost every episode. Stopping him was his zookeeper, Mr. Twiddle (Don Messick), whose success varied greatly between episodes. Having any other character appear in more than one episode was itself a rarity.