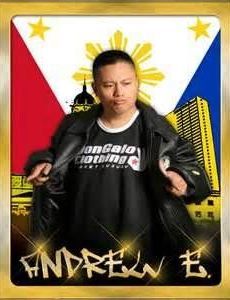 Andrew E., real name Andrew Ford Valentino Espiritu (born July 30, 1967), is a Filipino rapper and actor who rose to popularity in The '90s and Turn of the Millennium. He is known for releasing, among others, a lot of rather comedic Bawdy Rap Songs. He also founded Dongalo Wreckords (named after his birthplace of Don Galo, Paranaque City), which he uses to launch the careers of aspiring Filipino rappers, one of them being the pop-rap collective Salbakuta.