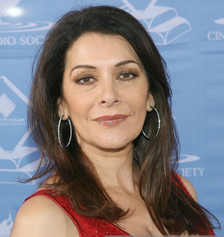 Marina Sirtis (born 29 March 1955 in Hackney, London) is a British-American actor best known for her recurring role as Counselor Deanna Troi in Star Trek: The Next Generation (which she reprised in future installments), but she has had roles across television and film since 1977.

George Pérez modeled Wonder Woman after Sirtis in his art for Wonder Woman (1987), though was aiming for an appearance more "inspired by" Sirtis rather than her exact likeness.