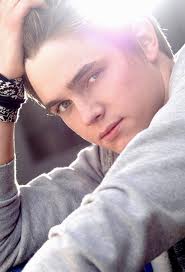 Right where you want him.

Jesse Abraham Arthur McCartney (born April 9, 1987 in Ardsley, New York) is a Teen Idol, formerly of the Boy Band Dream Street. He released his first solo album in 2004. "Beautiful Soul" is regarded as the song that shot him to fame. He's also an actor and voice actor.

He gained recognition in the late 1990s by starring in the daytime drama All My Children as JR Chandler. He later joined boy band Dream Street, and eventually branched out into a solo musical career.

Additionally, he has appeared on shows such as Summerland and Greek. He also is known for lending his voice as Theodore in Alvin and the Chipmunks and its sequels, as well as voicing the characters Roxas and Ventus in the Kingdom Hearts video game series, developed by Square Enix. He then voiced Robin/Nightwing for Young Justice.

No relation to Paul McCartney.

Don't want a minute to go to waste, I want you and your beautiful soul...