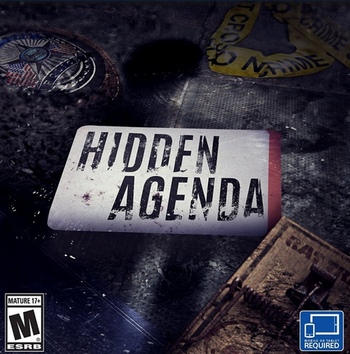 Hidden Agenda is a crime thriller video game developed by Supermassive Games and published by Sony Interactive Entertainment released on the PlayStation 4 in October 2017.
Advertisement:

The game works like an interactive movie, in a similar fashion to Supermassive's previous game, Until Dawn. The key difference from its predecessor, however, is that multiple players can join in using the PlayLink app on their mobile devices, and vote for choices, find clues, perform Quick Time Events and other such things. In Story Mode, everyone just sits back to relax and play through the story and see what they can find. But in competitive mode, players can get a Hidden Agenda they want to push for, either through convincing their fellow players or taking over the choice with a takeover card.

The plot revolves around a serial killer called the Trapper, who booby-traps his murder scenes so that the first police officer to investigate will become an additional victim. During the tutorial mission, police officer Becky Marney catches a troubled young man named Jonathan Finn in the act of setting up a Trapper crime scene; after his arrest, he confesses to the Trapper's crimes and is given a death sentence. The story then jumps forward five years: Finn's execution date is 48 hours away, when he suddenly changes his story, and claims that he took the fall to cover for the real Trapper, who he claims is a man named Adam Jones. Becky is skeptical, but then the Trapper (or is it?) strikes again...