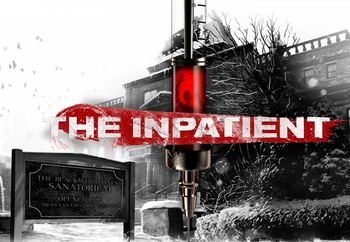 The Inpatient is a first person Survival Horror game made by Supermassive Games for PS VR. The game functions as a prequel to their previous horror game Until Dawn and was released on January 23rd 2018.
Advertisement:

The game focuses on an unnamed but slightly customizable protagonist (meaning you can choose their gender and skin color) who finds themselves at the Blackwood Pines Sanitarium in the 1950's, with a case of amnesia during the wendigo massacre of the Sanitarium as described in the previous game. Meeting their roommate Anna/Gordon, depending on which gender you choose in the beginning of the game, the player must uncover the truth behind their missing memories as they try to survive the massacre and meet up with the other survivor as they try to escape the madness.

Much like Until Dawn there are a number of choices and dialogue options given to the player to effect the story, with the Butterfly Effect still being at play, given the game Multiple Endings.