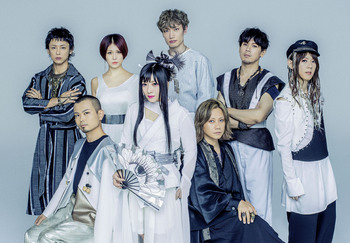 Wagakki Band (literally translated, "traditional instrument band") is an eight-member Japanese Folk Rock/Folk Metal musical ensemble. The band, fronted by lead singer and songwriter Yuko Suzuhana, has gained significant popularity among fans of Japanese rock music for their exotic musical approach, which combines catchy vocals and a hard-edged rock/metal sound with traditional Japanese instrumentation; their lineup consists of a full 'regular' rock group and a full traditional Japanese ensemble playing as one large, perfectly balanced whole. The band is also well-known for their colorful and dynamic image; the members all wear some form of traditional attire, and combine Kabuki-esque theatrics with the wild and energetic showmanship typical of Visual Kei bands.

You may know them for their covers/rearranges of Vocaloid songs such as Senbonzakura or Tengaku - they even covered Luka Luka✭Night Fever!