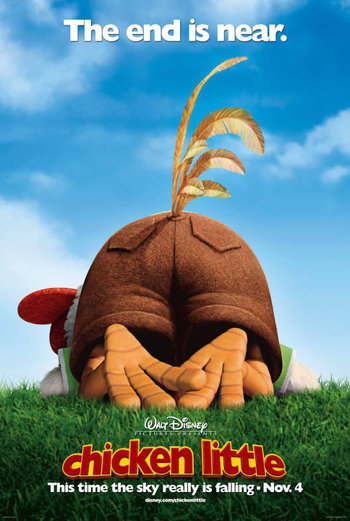 When it comes to saving the world, it helps to be a little chicken.
Advertisement:

Chicken Little is a 2005 computer-animated film produced by Walt Disney Animation, and is the Disney Animated Canon's first completely CG film not by Pixar, as well as the first CGI non-Pixar movie to Disney as a wholenote 2000's Dinosaur had CG characters against live-action backgrounds. The 46th film in the Disney Animated Canon, it is based on the fairy tale of the same name, but set in modern times and given a Science Fiction spin.

In the original tale, a little chicken is hit by an acorn on the head and believes that the sky was starting to fall down in pieces; he/she sets out to warn the king and is joined by other animal characters, eventually running into the evil Foxy Loxy, who wants to eat them.

In the movie, Chicken Little is a nerdy boy who gets bullied in school despite his cleverness because of that ONE false alarm he created that caused waves of panic throughout the town a year earlier. He also has a troubled relationship with his widowed father, Buck Cluck, who cares more about the approval of his peers than caring for his son. He tends to hang out with other unpopular kids — such as Abby Mallard (a homely duck girl who has a crush on Little, but he doesn't seem to realize it); Runt of the Litter, a cowardly, morbidly obese pig who can't stop eating; and Fish out of Water, who is an actual fish out of water who wears a diving helmet (filled with water) to be able to breathe. They often get teased by Foxy Loxy, a female bully. But as the film progresses, Chicken Little and his friends uncover the presence of extraterrestrials in their town and attempt to warn the now-extremely skeptical townsfolk before all havoc breaks loose.

The movie had two game adaptations, one of them based in the movie-within-the-movie.

This is the second single-story Disney Animated Feature after Robin Hood (1973) to use anthropomorphic characters with no humans. A third film with this concept, Zootopia, was released in 2016.

Note: Disney had already adapted the Chicken Little story once before, as a 1943 animated short parodying, of all things, Nazi propaganda. See this page for tropes relating to that version.

Example of:
Dodgeball Is Hell