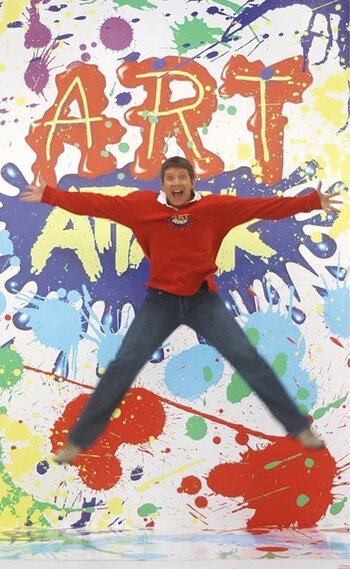 A British children's TV show on CITV that ran from 1990 to 2007 (another series has started, but is almost completely unrelated aside from reusing the name.) Presented by Neil Buchanan, its mission was to interest kids in art, and it achieved wild success both in the UK and overseas.

The format of the half-hour show consisted of three segments in the studio, which took the form of a giant-size art set, in each of which Neil would do a short project (or "Art Attack") interspersed with shorter segments, one of which was always Neil making a "Big Art Attack" consisting of arranging a huge number of everyday items on a background (usually the floor) to form a giant picture when viewed from above.

Besides presenting the art as something easy to get into and the iconic, brightly-coloured set, it was popular because of Neil Buchanan's easygoing presenting style coupled to self-referential humour. As a measure of this popularity, for several years ITV paid for Neil and the team to go to various exotic locations for the Christmas Episode and make a Big Art Attack using, for example, the lights of New York skyscrapers.

A recurring character was "The Head," an animated stone bust in a museum, who would pop up in his own short scene after each Art Attack to recap Neil's instructions and then present his own effort, which inevitably had gone amusingly wrong somehow. In terms of visuals, this show is definitely in Homage of The '60s childrens' TV art show. Vision On, which minimised the spoken word and emphasised the visual.

Between 1998 and 2005 Disney co-produced several different foreign language spin-offs of this show, also titled Art Attack, for various different countries. Each version had a different host (for example, Jordi Cruz hosted the Spanish version, and Rui Torres was the Latin American presenter). These foreign versions were recorded on a smaller set, and the footage was mostly made up of stock footage from the original, hence why the projects shown were largely the same. The Head was also retained, as were Neil Buchanan's Big Art Attacks.

Following ITV's cancellation of the series in 2007, the series was sold by HIT Entertainment to Disney, who then made a revamped version in 2010 aimed at a pre-school audience. The series was filmed in Argentina, and was presented by a selection of different presenters, with Emiliano Pandelo hosting the Latin American version for example. The revivalfeatured more Disney-focused makes, and used footage of an artist making them to save on costs. Local artist Alexiev Gandman was chosen to do the Big Art Attacks, while The Head was replaced with a new character - Vincent van Coconut.