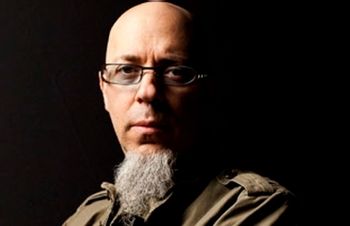 And I'll see you on the road.
Influenced by:
Advertisement:

Jordan Charles Rudess (born Jordan Charles Rudes, November 4, 1956) is an American virtuoso keyboardist, music technology developer, and composer. He is considered one of THE greatest keyboardists of all time and frequently tops any online poll on the subject. He is most prominently known as the keyboardist for Dream Theater and Liquid Tension Experiment and as the owner of the iOS based music technology company, Wizdom Music. He's also been a guest keyboardist on a large number of side projects, from Ayreon to Neal Morse.

Jordan Rudess began playing piano in the second grade and picked it up very quickly, getting enrolled in the prestigious Juilliard at the age of nine to be trained as a classical pianist. As a teen, he discovered Progressive Rock and the Moog synthesizer, and stopped his training as a classical musician to pursue a career as a solo Progressive Rock artist. He played in several projects in the 80s and gained notoriety after he won a reader poll in Keyboard Magazine for best new talent. He would then join The Dixie Dregs as a part-time keyboardist, and form a sort of power-duo with Rod Morgenstein.

In 1997, Mike Portnoy invited him to play as the keyboardist in a Progressive Rock supergroup called Liquid Tension Experiment. After two albums there, they asked him to join Dream Theater. He agreed, replacing Derek Sherinian, and helping them release their magnum opus, Metropolis Pt. 2: Scenes from a Memory. He became the permanent keyboardist of the band, and to date has been all of their releases since he joined. He's enjoyed an extensive solo career on the side of that, exploring every genre from electronic music to Progressive Rock to Classical to Solo Piano.

In 2010, he started the company Wizdom Music to create new music software and new ways to use smartphones and tablets as music instruments. Wizdom Music has also developed apps in everything from music education to camera apps. Outside of his music apps, he has also helped promote and launch several keyboard technologies, including the Roli Seaboard, harpejji, haken continuum, and the XKey Air Bluetooth Controller. He also has an online music education website, called the Jordan Rudess Online Conservatory.

Jordan Rudess and his works provide examples of the following tropes: