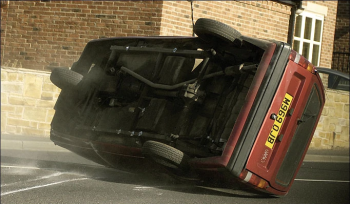 If you can believe it, the driver of this Robin crashed it about eight times.
All of those crappy cars that appear in fiction have to come from somewhere, and there's no shortage of Real Life Alleged Cars to provide inspiration. From all over the world, from the industrial powerhouses to up-and-coming nations, people have encountered cars like this. They constantly break down, they're made of substandard materials and fall apart, they're ridiculously underpowered, and they might even be so unsafe that they can't legally be sold in certain countries. You might see such cars referred to as "lemons

There's also a subset of Alleged Cars that aren't actually truly horrible and non-functional, but they have this reputation because they're cheap, foreign, underpowered, ugly, and often horrendously mismarketed. If these cars function poorly, it's mostly because nobody bothers to maintain them, and any car can become a rickety deathtrap if it's sufficiently neglected. Examples on this page should be genuinely terrible cars, or at least have this reputation in the media and be totally unable to shake it. We're not here to just catalogue crappy cars that people have found; there's got to be something inherently wrong with it.

For vehicles that fit the bill of an Alleged Car without actually being cars (boats, planes, etc.), see here.

Australia
Australians can be fickle about their cars, which can be partly attributed to the harsh outback conditions these cars are often driven in. There's a reason that Australian car magazine Wheels has, on multiple occasions, refused to award a "Car of the Year"

. If you don't impress the Australians, you're not going to last long.
Advertisement:
Europe