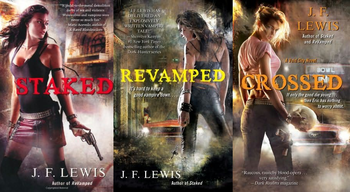 Void City is a series of novels by J. F. Lewis.

Void City is a haven for supernatural beings. A powerful magical artifact called the Veil of Scrythax keeps the human population in a state of bespelled ignorance, allowing vampires, werewolves, and other monsters to walk the streets freely and prey on whomever they please without repercussion.

Eric Courtney is one of the most powerful vampires in the city, but he has no interest in supernatural politics. A rough resurrection left him with a damaged and unreliable memory; he has a difficult enough time remembering not to step out into sunlight anymore, let alone following the complex machinations of his fellow immortals. He's content to run a strip club, pining after his now-elderly former fiancee while engaging in a series of hollow relationships which usually end up with him having to stake his girlfriends after they convince him to turn them.

But Eric can't remain aloof forever; not when he's being targeted by power-hungry vampires, extremist religious werewolves, and scheming demons. In order to survive and protect his loved ones, he will have to uncover the forgotten truth about how he became a vampire and the Courtney family curse.

The series consists of Staked, Revamped, Crossed, and Burned.