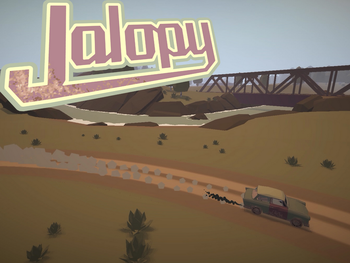 Jalopy is a video game in which the player drives their Uncle Lütfi throughout eastern Europe in a Laika 601 Deluxe. Set just after the fall of the Berlin Wall, the plot is relatively simple: The player character and their uncle Lütfi embark on a trip from Berlin to Turkey, armed with nothing but the clothes on their back and their trusty cobbled-together Laika sedan. Along the way, the player must do what they can to keep the journey moving, such as keeping the Laika's various components in good condition (or replacing them with better parts) getting fuel and oil for the car, avoiding fines from the border guards, and making money so they can pay for the various expenses of the trip.
Advertisement:

Despite the complexity of the gameplay, overall the game is very simple and minimalist compared to other games such as My Summer Car. The story pretty much consists of travelling from Point A to Point B, occasionally diverting to scrapyards or gas stations to buy parts and/or resources needed to maintain your car. Your only companion is Uncle Lütfi, who will regale you with conversations on history and muse about the state of post-Cold War central Europe, and occasionally chide you for turning the radio up too loud, rolling down your window while it is raining, and driving too recklessly.