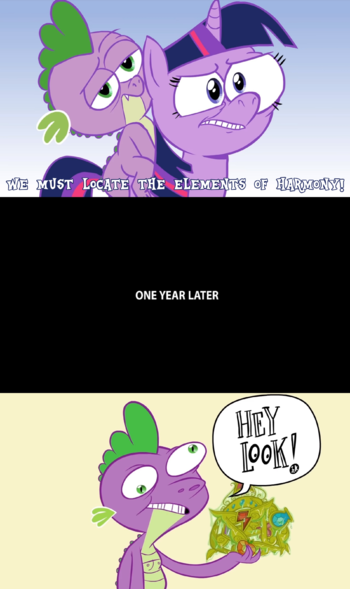 "That's why everything sounded so muffled."
Helena: She lost her teeth yesterday. I said "If Mum were here, she'd find them. She's amazing at finding things." She said "If your Mum could find them, she must be a miracle worker."
Joanne: They'll be staring her in the face. They always are.
Helena: They were in the fridge.
— MirrorMask
Advertisement:

The main example of this is when a character loses their glasses. They will always, inevitably, have them on their head. Works with keys, books, and pretty much anything you can hold in your hand.

May frequently involve being Hidden in Plain Sight. The character may also have Failed a Spot Check. As many folks can attest, this is Truth in Television.

Ledger looks over the entire map to find Franko, eventually finding him on the wall behind a building after 5 whole minutes.

Ledger looks over the entire map to find Franko, eventually finding him on the wall behind a building after 5 whole minutes.