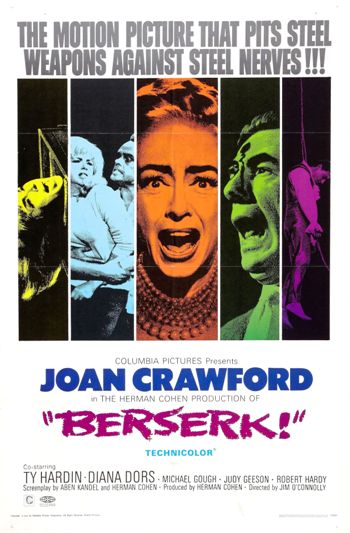 Berserk! is a 1967 British B-Movie and the penultimate film of Joan Crawford. It was one of the many low budget horror films that Crawford starred in during the 60s hoping to keep her career afloat.

Crawford plays Monica Rivers, the ringmaster of a struggling circus. One evening, a tight rope performer's rope snaps and he is hanged in front of the crowd. Shockingly enough, this proves rather good for business; hundreds of people start buying tickets for more shows. As business continues to boom, suspicion falls on Monica—especially after it turns out that the accident may not have been an accident at all.

Not to be confused with the classic arcade game Berzerk or the Dark Fantasy manga Berserk.