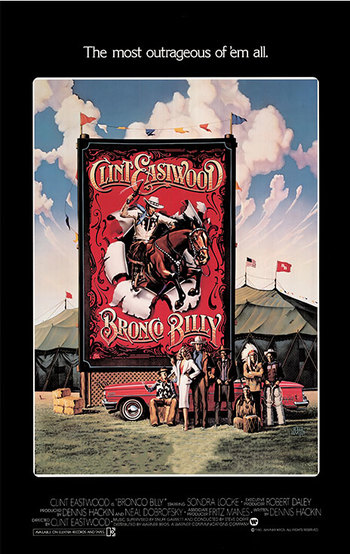 Poster within a poster
"Do you understand what Bronco Billy and the Wild West Show are all about? You can be anything you want. All you have to do is go out and become it!"
— Lorraine Running Water, Bronco Billy
Advertisement:

Bronco Billy McCoy (Eastwood) is the boss of a traveling Wild West show. He uses his gunslinger skills during the main act of the show. Things are not going well for the show and the troupe is running out of money. Moreover, Bronco Billy is looking for an assistant for his performance. The troupe crosses path with Antoinette Lily (Locke), a rich heiress who has just married a guy she does not love, because she had to marry someone not to lose her inheritance. The groom is soon fed up with Antoinette's temper and he leaves her after stealing all her money. Antoinette has no choice but asking the help of Bronco Billy.