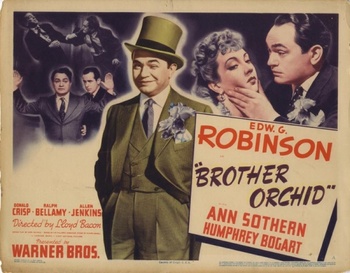 Brother Orchid is a 1940 crime dramedy directed by Lloyd Bacon.

John Sarto (Edward G. Robinson) is the leader of a minor gang of hoodlums who run a protection racket. After his more vicious second-in-command, Jack Buck (Humphrey Bogart, still in the "third billing as a gangster" phase of his film career), kills a rival, Sarto thinks that the criminal world is getting too brutal for him. He turns over leadership of the gang to Buck, abandons his moll Florence (Ann Sothern), and goes off to Europe to live in style.

Only problem is, five years of living in style leaves Sarto broke. He goes back to American to reclaim leadership of his gang, but, unsurprisingly, Buck is not interested. Buck throws Jack out of the office with a warning that he'd better leave town if he wants to stay alive. Meanwhile, Flo has gotten a new boyfriend, a cattle rancher named Clarence Fletcher (Ralph Bellamy), but unlike Buck and the gang, she eagerly welcomes Sarto back and starts making plans to get married.

Sarto recruits some more hoodlums and starts to wage war against Buck. Flo, who is well-intentioned but not very smart, lures Sarto into a meeting with Buck with the thought of making peace between them. Instead Buck has his goons take Sarto into the woods to be murdered. He manages to escape, however, and runs off into the forest, eventually reaching a monastery.

Sarto hides out in the monastery, recovering from his bullet wound, and marveling at the guilelessness and gentle spirit of the monks, who sustain their meager existence by selling flowers in New York City. Eventually he grows to admire them—but he still has a score to settle with Jack Buck.