Here's an idea...
Every episode beginning note Well, maybe not every episode 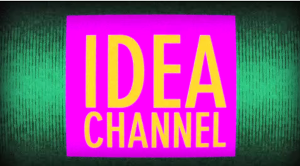 Started in February 2012, The Idea Channel was a series of weekly videos supported by PBS and hosted on YouTube by Mike Rugnetta. It examined the weird, wacky and fascinating connections between pop culture, technology and art. Basically, its philosophy is bite-sized form, facilitated by millions of references, gifs, funny pictures and an extreme motor mouth.

Every week introduces a new idea, ranging far and wide in topic and scope. For example, take the following video titles; "What Do Santa And Wrestling Have In Common?", "Is YouTube Making Us Smarter?" and "Is A DOS Attack A Weapon?" Each video used to have a short minute or so section where a selection of comments on the previous video were highlighted for further discussion, but now, those comments are shown in stand-alone videos.

Winner of two Webby awards in 2013, for Best Editing and Best Web Personality/Host. Can be found here

On June 30, 2017, Rugnetta announced that he was ending Idea Channel

. The final Idea Channel aired on August 28 and the final Comment Response on September 4. Since the channel's retirement, a similar channel, the open-sourced Idea Project

, has taken up the mantle left in its absence with Rugnetta's approval.