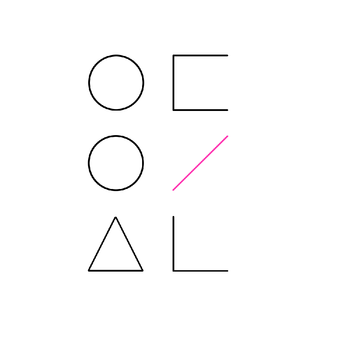 The LOONA logo as of Feb 2018. Explained under "Fun with Acronyms".
LOONA is a K-Pop Girl Group project managed by Blockberry Creative, a subdivision of Polaris Entertainment. On August 20, 2018, the 12-member group officially debuted together with their lead single "Hi High"; each member had a month to herself in order to release a solo single and music video.
Advertisement:

There are also three pre-debut subunits, LOONA 1/3 (with a pure image to draw in Korean audiences), LOONA/ODD EYE CIRCLE (darker, edgier and designed to appeal to Western listeners), and LOONA/yyxy (whose concept revolves around one's youth and ego). The full group's title tracks ("Butterfly," "So What," "Why Not," "Paint the Town," and more to come) generally revolve around a common theme of self-empowerment and the rise to an individual's full potential, particularly for young women — usually while making references to the lore.

The group is known for its continuous storyline and worldbuilding; everything released under LOONA's name adds up to create a fantastical story occurring in the LOONAVERSE, a fictional universe in which the members reside. The main plot rotates around their struggle to find each other upon being scattered to different parts of this universe, but all members and subunits have their own mythology; for example, ViVi's storyline revolves around feeling isolated as an android amongst humans and Chuu's around her desire to be closer to Yves.

Other group ventures include an approximately 1 minute long and regularly uploaded show, LOONA TV, in which we follow the members through their cycle of photoshoots, travel, MV shooting and fan meets.

Most of the members also star in a college romance webseries called ''First Love Story''.

In September of 2021, it was revealed that Blockberry Creative

was in severe financial straits, owing almost $800,000 USD in unpaid wages, as well as employee taxes, insurance, and other owed expenses, leaving the group's future in uncertainty (although they have continued to release music after the news was announced).

Each member has a signature colour and animal, at least one of which will appear in their solo music video. The last unit along with Choerry have fruits, which activate their passage into other dimensions when eaten. For reference:

Advertisement:
open/close all folders
Members (in order of solos)