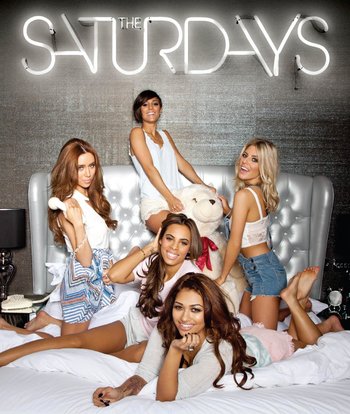 The Saturdays (sometimes referred to as "The Sats") were a British-Irish girl group consisting of (clockwise from top): Frankie Bridge (née Sandford), Mollie King, Vanessa Whitenote (2007 — 2017), Una Healy, and (in the center) Rochelle Humes (née Wiseman).

Formed in 2007, The Saturdays first gained attention by opening for Girls Aloud and The Jonas Brothers at various concerts throughout 2008.

Shortly thereafter, they released their first single "If This Is Love", which peaked within the UK top ten. Their debut album Chasing Lights soon followed, boasting further hit singles "Up", "Issues", and "Work". During this time, they also released a cover of Depeche Mode's "Just Can't Get Enough" for the Comic Relief.

Wordshaker, their sophomore effort, was released less than a year later. Though it roughly matched the success of their debut, some considered Wordshaker a disappointment, and it only spawned two singles. Perhaps in response to this, an Updated Re-release called Headlines! was issued months after, featuring a revised tracklisting and new songs.

The Saturdays released their third album, On Your Radar, in 2011. Featuring a more electronic-dance sound than their previous works, it spawned one of their most popular singles "All Fired Up", a lyric from which named the album itself.

In 2013, The Saturdays attempted to break into the American music market with a reality show on E!! called Chasing The Saturdays, complemented by an internationally-released EP of the same name. Though the endeavor wasn't exactly successful for them, the EP did produce the single "What About Us", which gave The Saturdays their first-ever #1 in the UK.

Their fourth studio album Living for The Weekend was also released later in 2013, featuring "What About Us" and a handful of other singles of varying success. In 2014, they released their first greatest hits album, Finest Selection. Though the album itself charted well, its lead single "What Are You Waiting For?" was a flop.

As of 2017, the group is on indefinite hiatus and focusing on individual projects. Una released a solo album, The Waiting Game, and served as a coach on The Voice of Ireland for its final two seasons. Rochelle has focused on television presenting, hosting shows like The Xtra Factor and Ninja Warrior UK. Mollie has released two singles with an album on the way, and is participating on the 2017 edition of Strictly Come Dancing, following Frankie's successful stint on the show in 2014. Frankie herself hasn't released any solo music since the group's hiatus, opting to focus on her family with her husband, rugby player Wayne Bridge. Vanessa has released a total of three solo EPs since 2014, and confirmed her departure from the group in 2017.

The Saturdays provide examples of: