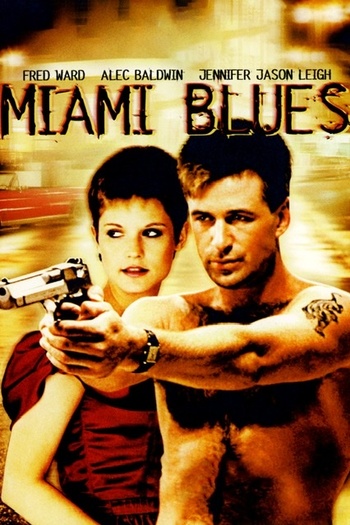 Miami Blues is a 1990 Black Comedy neo-noir directed by George Armitage and starring Fred Ward, Alec Baldwin, and Jennifer Jason Leigh, adapted from the novel of the same name by Charles Willeford.

Frederick "Junior" Frenger (Baldwin) is an ex-con and professional identity thief who hopes to start a new life in Miami. Unfortunately, while in the airport Junior inadvertently causes the death of a Hare Krishna and he makes a run for it. Hiding out in a hotel, he meets a naive and ditzy hooker named Susie Waggoner (Leigh). Falling in love with her, they make plans to settle down together. Unbeknownst to Susie, who believes he has reformed, Junior steals the badge, gun, and dentures of aging detective Hoke Moseley (Ward) and embarks on a crime spree by stealing the loot of other criminals. Understandably angry, Moseley begins pursuing Junior.