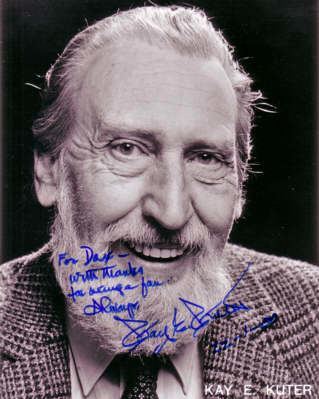 An autographed publicity photo of Kuter from The '90s.
"Yes, 'kavorka'. It is a Latvian word that means 'the lure of the animal'.... Women are drawn to you. They will give anything to be possessed by you."
—Kuter in the Seinfeld episode "The Conversion", naming a trope
Advertisement:

Kay Edwin Emmert Kuter (April 25, 1925 – November 12, 2003) was an American character actor who enjoyed a five decade-long career. Along the way, he played a wide variety of characters, ranging from Satannote in a stage production of Damn Yankees to Santa Clausnote in the Direct to Video animated feature Annabelle's Wish to Dr. Seussnote as the voice of the famous author in In Search of Dr. Seuss, and he appeared in everything from Sabrina (1954) to Sabrina the Teenage Witch.

Born to a showbiz family (his father was Hollywood art director Leo K. Kuter, his mother The Silent Age actress Evelyn Edler), Kuter began acting in The '50s. By the mid-Sixties, he was playing his best-known role: Newt Kiley, one of the Hooterville farmers in Green Acres and Petticoat Junction. (He also started using a middle initial because of his Gender-Blender Name.) He had something of a career renaissance in The '80s and The '90s following his appearance in The Last Starfighter; he was cast in prominent guest roles on popular series such as The X-Files, The Twilight Zone (1985), Baywatch, Charmed (1998), and two Star Treks (Next Generation and Deep Space Nine). He also got into voice acting, doing everything from Animated Series to Video Games to Advertising, where he was best known for his candy commercials ("Little Hershey's Kisses... big chocolate taste!"). He was active until a few weeks before his death in 2003 at the age of 78.

It's worth noting that Kuter was there at pivotal moments for two tropes. He appeared in the Bonanza episode "The Julia Bulette Story", which was the series' Ur-Example of the Cartwright Curse. And of course, his appearance in the Seinfeld episode "The Conversion" made him the Trope Namer for Kavorka Man.

Kuter passed away in 2003 from pulmonary disease — only four months after his mother passed at the age of 103.