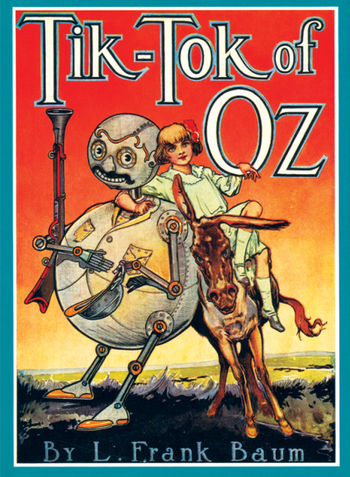 Tik-Tok of Oz is the eighth book in L. Frank Baum's Land of Oz book series. Baum dedicated the book to Louis F. Gottschalk, friend and composer, who wrote the music for several Baum projects, including the stage version of this story, The Tik-Tok Man of Oz.

The book begins with Ann Soforth, queen of Oogaboo, growing tired of being ruler of a small micronation within Oz and setting her aspirations for world conquest. She gathers a meager army of sixteen men and sets out for the Emerald City, only to be redirected once Glinda the Good finds out about the invasion into another land outside Oz, where they encounter a dragon-like Rak, only narrowly escaping.

Meanwhile, Betsy Bobbin, an American girl, washes up on a strange shore after a storm wrecks the ship she was on; she is accompanied by her faithful mule Hank. Betsy and Hank find themselves in the Rose Kingdom where sapient talking greenhouse roses inform them that strangers are not allowed. As the Royal Gardener is about to pass sentence on the two, the Shaggy Man crashes through the greenhouse roof. He charms the Gardener into benignity with his Love Magnet. The roses, who have no hearts and are thus immune to the Magnet, demand the travelers leave; they do so, taking with them the newly-plucked Rose Princess Ozga, a cousin of Ozma. Shaggy Man is on a quest to find his long lost brother, who he believes was kidnapped by the Nome King. Along the way they find Tik-Tok, the robotic friend of Dorothy and Ozma who the Nome King had thrown into a well, and run into the Army of Oogaboo. Together they decide to invade the Nome King's realm.