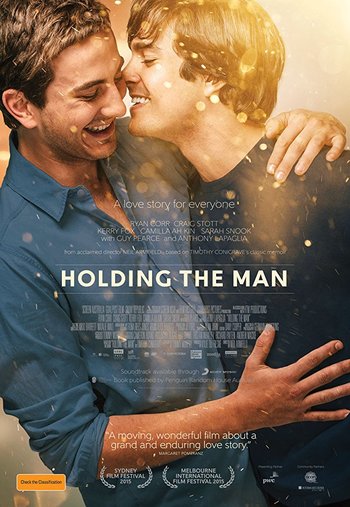 "On the far side of the crush I noticed a boy. I saw the body of a man with an open, gentle face: such softness within that masculinity. He was beautiful, calm. I was transfixed. He wasn't talking, just listening to his friends with his hands in his pockets, smiling. What was it about his face? He became aware that I was looking at him and greeted me with a lift of his eyebrows. I returned the gesture and then looked away, pretending something had caught my attention. But I kept sneaking looks. It's his eyelashes. They're unbelievable."
— Timothy Conigrave
Advertisement:

Adapted from a Memoir of the same name, Holding the Man is a 2015 Australian drama that retells the relationship between the memoir's writer, Timothy "Tim" Conigrave, and his lover for 15 years, John Caleo.

The story was divided into three parts; High school period (the book includes Tim's middle school period), College period, and Sydney period (when they move together to Sydney after Tim finishes drama school). The book was published in 1995, several months following Tim's death in 1994. The book itself won United Nation's Human Rights Awards for Non-Fiction in 1995 and was listed as one of "100 Favorite Australian Books" by Australian Society of authors in 2003. It was adapted into a stage play in 2006 and later, into this movie directed by Neil Armfield with Ryan Corr as Tim and Craig Stott as John with supporting performances from Guy Pearce, Kerry Fox, Anthony LaPaglia, Sarah Snook, and others.

In all-boys Xavier Catholic High School, Melbourne, Tim, who was an aspiring actor, and John, who was captain for the school's football team (hence the title of the work which is taken from a transgression that incurs penalty in Australian rules football), fell in love with each other. Their love stayed strong in the face of multitude life adversaries; Families and school's disapproval, separation due to pursuing different careers, temptation for promiscuous lifestyle, discrimination, until a problem love can't solve tried to separate them...

A feature-length documentary about Tim and John titled Remembering the Man was also released in 2015, premiering on 18 October, on the 21st anniversary of Tim's death.

This story and its film adaptation contain examples of:

"I guess the hardest thing is having so much love for you and it somehow not being returned. I develop crushes all the time, but that is just misdirected need for you. You are a hole in my life, a black hole. Anything I place there cannot be returned. I miss you terribly.