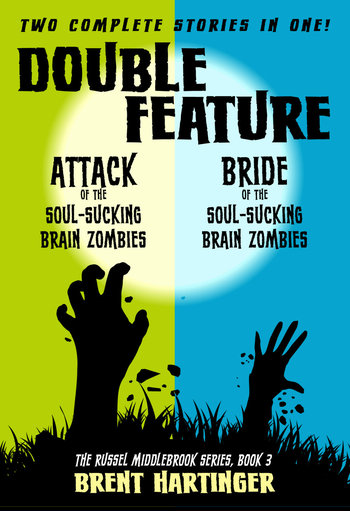 In Attack of the Soul-Sucking Brain Zombies, Russel is excited that his boyfriend is coming over for Thanksgiving as well as being an extra in the movie. But several complications come up at once: Kevin Land, his ex, is starting to make his move and Russel hasn't quite gotten over the breakup. Not only that, his parents find out that he's gay and are not accepting. Dealing with parental rejection and his unresolved feelings for Kevin, Russel has to make a decision between boys and standing up to her parents.

In Bride of the Soul-Sucking Brain Zombies, Min is feeling lonely after her summer romance crashed and burned. But during the audition, a new girl catches her eye. She seems perfect on the outside, but she's hiding some secrets from Min. Not only that, Min wants to protect Russel from getting his heart broken by Kevin again, no matter what it takes.

This page contains spoilers for both Geography Club and The Order of the Poison Oak.