Podcast / As It Occurs to Me 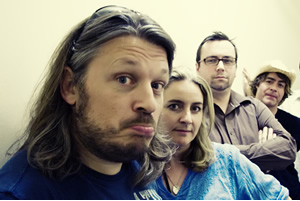 "Stewart Lee would never do this."
YouTube user KneejerkHateMachine

As It Occurs To Me (AIOTM (aiotm)) is a sketch and stand-up show by comedian Richard Herring. It ran for three series, plus four specials, between 2009 and 2011. During its first three series, it was recorded weekly in front of a live audience, usually at the Leicester Square Theatre in London, then released unedited as a podcast. (It is still available for free from the British Comedy Guide.

Emma Kennedy and Dan Tetsell co-star, with Christian Reilly providing music and the occasional extra voice. Each episode's material is based on Herring's experiences and musings of the preceding week - things which 'occur' to him, as in things that happen to him, but also as in things he thinks of. Get it? Despite this, the ultimate reality of the show is less topical than it is a surreal and self-contained universe of recurring characters and in-jokes.

After a successful Kickstarter campaign, the show returned in 2016 for a series of six video episodes of the show, which would be recorded live and promoted with a series of six monthly audio podcasts in the style of the first three series.